The major change in dough rheology during mixing derives from the biochemical and physical changes of dough during a mixing process. A Farinogram charting the change in consistency of dough by measuring the torque exerted during a mixing process is shown in Figure 26.1. Mixing actions impart both elongation and shear to the dough. The strains incurred could be up to 500 000% over the course of mixing and these have a major effect on the molecular arrangement of the gluten, significantly contributing to the development of the dough. The high shear rate in the mixer removes the outer layer of flour particles as they become hydrated and exposes a new surface for hydration whilst a lumpy mass of dough is formed (1a-I). The dough gradually becomes coherent and exhibits elasticity, plasticity and memory as well as viscous properties. Continuing mixing reduces the tendency of dough sticking and produces a smooth surface with dough seen wound around the mixer. It stiffens as mixing proceeds and the viscous and elastic components increase up to a point of optimum consistency, known as peak development, when the torque on the mixer shaft or the power consumption of the motor is the greatest (1a-II). The dough looks silky and glossy at this stage. If mixing is continued, the consistency of the dough will decrease as mixing torque and power decrease. Dough elasticity decreases and dough becomes increasingly extensible or plastic (1a-III). If overmixed, it becomes sticky and extensible. Molecularly, the physical changes that appear in dough during the course of mixing result from the formation of a gluten network, a unique composition and interaction of hydrated gliadins and glutenins. The presence of water provides a medium for molecular interactions and reactions between proteins in flour. Both chemical and physical processes occur and work in tandem.
In the initial stage of mixing, when the dough is a lumpy mass, the proteins formed are swollen. They are compact isolated masses with adhering starch granules. These glutenin molecules are distributed randomly (1b-I and c-I). As mixing progresses, the protein starts to become inter-connected; the protein masses are stretched into continuous sheets that support starch granules (1b-II and c-II). The glutenin molecules are stretched and extended into strands forming films. The mixing process helps to align the gluten molecules to build a network consisting of unbranched glutenin molecules. The alignment of glutenin molecules leads to a large number of the non-covalent bonds such as the hydrogen bonds, hydrophobic bonds and chain entanglement. The unbranched glutenin molecules have disulfide cross-links within the chains and non-covalent cross-links between the chains.
The protein aggregate is broken down and glutenin molecules depolymerize (1 b-III and c-III). Mechanical fission of the polypeptide chains occurs and the average molecular weight of protein decreases (Danno and Hoseney 1982b). Hoseney (1985) referred to this as cleaving of disulfide bonds. These molecular changes of protein molecules during mixing are the principal cause of the physical and rheological changes in dough during mixing. The rheological properties of the gluten network lends dough the ability to entrap gas bubbles and subsequently form a stable foam structure (Baker 1941; Baker and Mize 1941). 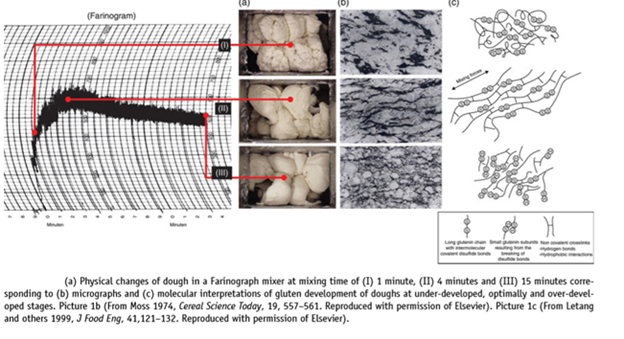